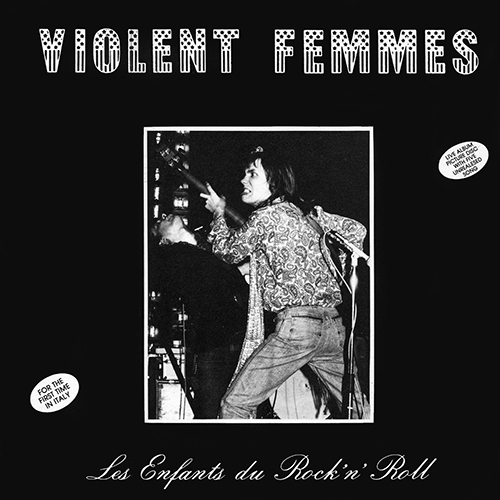 Note: I was told years ago by an individual who possessed the Master Plates for the record, Original Pressing included 1000 Copies on Black & 200 Copies of the Picture Disc were made. This is a believable quantity for average small run pressings. There is another source Claiming 500 In black and only 50 Picture Disc pressed. I was also told by this individual that the amount of Picture Discs Manufactured was higher, but due to bad pressing & peeling; the majority were scrapped. So The actual Amount in circulation is debatable.

Interview Included on the Picture Disc:
After the Concert… …Exclusive…
Q: Where did you learn to play?
A: All by myself , I don’t know how to read the music (wonderful audience, I like the city, great promoter, I like everything
Q: Is it true the band is going to break up?
A: NO, isn’t true!
Q: Is it true that your sound is like the old Velvet Underground?
A: we have jam-Met with Maureen Tucker of V.U and she said that our sound can’t be similar to theirs, and our sound it’s just that of Violent Femmes.
Q: What you say in your songs?
A: give you 2 mean
Q: what’s going on in California?
A: I hope that it’s sunk into the ocean!
Q: why?
A: It’s a bad place, i like more northern parts
Q: Have you been in New York?
A: Yes many times, we’ve played there too.
Q: American radios play your Songs?
A: yes, just sometime, cause our songs stand against Reagan and he has absolute control of the radio stations.
Q: what do you think about the pope?
A: pope smoke Dope!
Q: what’s your faith?
A: I haven’t so I don’t believe in religion.
Q: In what do you believe, in the life?
A: It’s difficult to to explain………..I take life like she comes, in this moment my philosophy it’s the fun, maybe someday I will change.
Q: Is It fun, the R ‘n’ R?
A: Of course it is.
Q: so do you believe in the R ‘n’ R?
A: Yes i believe in it, but I don’t believe in musical industry, it Kills the R ‘n’R.
Q: when the new album?
A: September
Q: live album?
A: No Studio.
Q: Why?
A: Because we are making a Live Video.
Q: And you Victor, when did you meet the others?
A: About Four Years ago.
Q: When will you come back here?
A: I hope soon, it’s very nice here.
Q: Where will you play in the next time?
A: In Casena
Q: Explain the sweet sound of your drum?
A: It’s natural for me.
Q: How come out your songs?
A: from a melody, from chords, from lyrics, we start to build songs.
Q: Do you like to play on stage?
A: Yes!!!! “Molto bene, molto bene”
Q: Where do you come from?
A: Milwaukee, Wisconsin