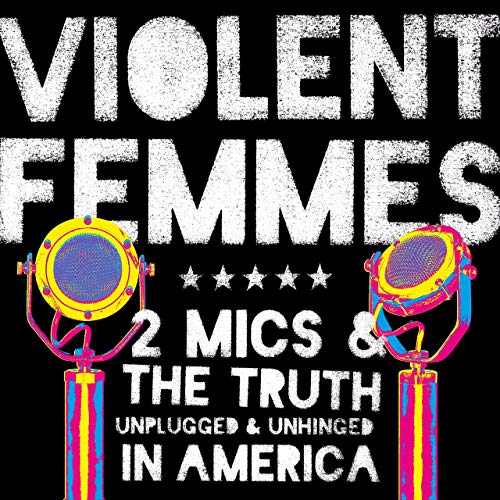 this is an unorthodox live LP. Here’s how it came about: We were on a USA Tour in support of we can do anything. Inevitably in these situations there are requests to visit radio stations and digital music outlets for interviews and general schmooze. We asked our radio promo person Ellena Osis to build acoustic performance into the events. There were two reasons for this request. VF specialize in a peculiar brand of acoustic punk and can deliver the goods 100% in that format. And to reinvent our oeuvre with a new recording concept.

We bought two Ear Trumpet Labs Edwina microphones in Portland, Oregon the day before we started the radio gigs. They are bluegrass mics designed for acoustic bands to stand around and mix themselves into proximity. We gathered around the mics and created the desired sound hierarchy depending upon relative volume. One mic pointed towards gordon (voice and guitar/banjo/fiddle) and one on my acoustic bass guitar and vocal. The other instruments (John sparrow’s percussion, Blaise Garza’s baritone sax, various guests) were not individually mic’d but grabbed through sound bleed. This is a similar method to the beloved early jazz, blues, country, rembetika, rockabilly and folk records which informed our aesthetic in the beginning.

Recording is in a decadent and effete phase. Engineers and producers ensconce performers in individual soundproof booths with comfy headphones. They build fortresses around musicians to stop the sound from leaking on each other’s hermetically sealed performances. That’s if there is a live element at ll. Psychologists define such concepts as separation and isolation as negative but it’s the goal of the modern recording environment. That’s why modern recording is stiff. All human element is polished away and we’re left with something that sounds like it is laid out on a grid. Because it is. This album is an antidote.

All Bands of our era recorded numerous albums which are snapshots of a creative moment in time and relatively rising or falling fortunes in the music industry. But it’s illusory to depict VF as making a series of discreet artistic statements. We started with a motherload of Gordon’s prolific juvenelia, occasionally adding new originals or covers to the mix. Our catalog did not proceed in songwriting chronology. This project refocuses attention upon the repertoire as a whole by stripping songs to their essentials, conveying them without artifice, and removing them from any timeline.

One of the innovations that enables this is John’s use of the werber grill as a percussion instrument. It plays at the the same volume as the acoustic bass and blends perfectly with the strumming of the acoustic guitar. this allows us to stand close to each other and play in balance. This is the first time we’ve delivered a full scale recording to the public which captures the sound and spirit of the band the way we play together when we’re working out songs in the hotel or dressing room. We recorded at five different radio stations with the same 2 mics. Variables were the rooms, audience (or not), and the recording engineers.

“A whiff of condensation is here elsewhere. It is enough. I go to spruce up.” – Nodrog Onag, 1720

(P)(C) 2017 The copyright in this sound recording is owned by Add It Up Productions under exclusive license to Play It Again Sam.