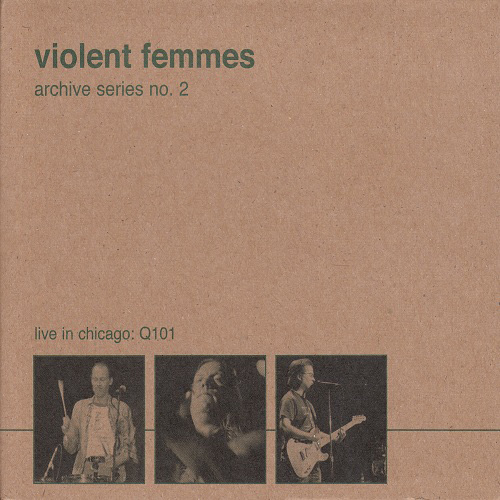 when a teenager is diagnosed with Violent Femmes, family and friends rally in support. the mom and dad dish out the dough for a couple concert tickets, an older sister lends out her first femmes record to help the young sibling feel better while a little brother forks out some cash for a new ‘best of vf’ song collection disc. the boyfriend doles out another lump for a couple souvenir t-shirts, while the girlfriend donates another chunk for some drinks and after-show eats.

what these folks didn’t know was what the violent femmes prescribed some songs that afternoon from a Chicago radio broadcast booth – playing over the airwaves in front of a live studio audience and a lone dj. performing with us and adding to the fun that day were sigmund snopek III and hani naser.

while these kinds of broadcast performances were not always recorded or preserved, the Q101 session from april 2000 has survived as a testament to what the fuss is all about. albeit acoustic, these radio-show gigs with gordon and brian always left me exhilarated, filled with an unexplainable electricity that inspired me to go on with the day. this archive collection may lift your spirit, too. it might take you where you like to be, a place uninhabited by who, how or why.

dedicated in memory of michael kahn