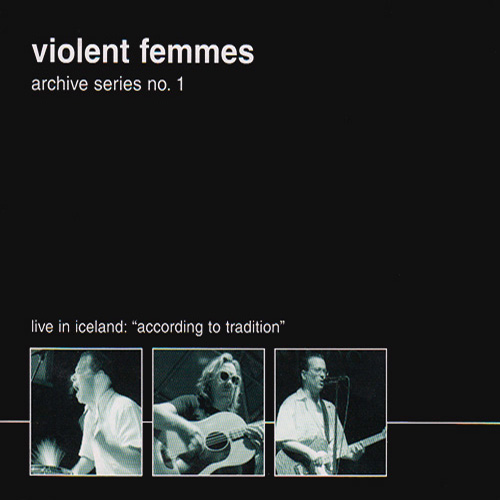 “velkomin”
Violent femmes have wended their way around the globe many times in their 23-years, but a proposed 2004 excursion to reykjavik, Iceland, was a first- and when the opportunity cam along, the band seized it like a thief would an unguarded jewel. Three fine young ice-landics extended the invitation. One had seen the band in London and swore he would bring them over to his homeland. As fridrik runar gardarsson, eirik sordal and vidar orn saevarsson were finishing their respective academic studies, they conceived a master plan to bring the raucous Americans over and make it happen. In the end it would take a bit of smarts, plenty of guts and a well of blind faith (and some cleverly obtained grant money), but the three proved resourceful and managed to give reykjavik an unforgettable evening. They are directly responsible for the document you now hold in your hands, and they have the band’s eternal gratitude and respect.

“breathing in the stink, ‘til finally I stunk…”
Iceland encompasses unfathomable beauty and history, and the band’s hosts were gracious and justifiably proud to help them discover it. Chartering a bus and with the help of a young tour guide of sorts dressed in an old eastern European-style military uniform-‘with a big tear in the crotch,” production manager bob Schultz recalls-the group set out on a small expedition. In Iceland’s wondrous hinterlands, they took in the gullfoss, arguably Europe’s largest waterfall, the mysterious blue lagoon (which, by the way, really is blue) and the majesty of thingvellir, at the rift of Eurasia and the Atlantic lands, site of what is believed to be the first-ever parliament.

But it wasn’t until the group reached geyser, the geo-thermal region with its hot springs and boiling terrain that violent femmes knew they had pleased the Icelandic gods with their arrival. The juxtapotion of frigid air and burning sail underfoot perfectly articulated the might of the forced that had shaped the island nation over the millennia. The group wandered among the vents, on what probably was some of the earth’s newest-formed crust and took in the wonder of it all – until a steaming, sulphuros plume shot into the air, soaking brian Ritchie in a rank, Icelandic baptism.

“22:30 to midnight”
There are always challenges in setting up a big rock show, and reykjavik proved no exception. But language and cultural barriers gave way to the sheer will of everyone involved to make the evening a success. Via the internet, brian had made contact with local performers Matthias m.d. hemstock and oskar godhonnson, who joined jarrod olman and Darren brown as the group’s notorious backup section, the horns of dilemma. the breidvangur concert itself? It’s here for your ears to hear. Six tracks of tension and grace by a band that continues forging its own way around the world two decades on – receive them with the same love with which they are brought to you.
-karl j. paloucek

Thanks to: free trade agency

All songs written by gordon gano (gorno music/a.s.c.a.p.)
© 2005 add it up productions
www.vfemmes.com